A very interesting meeting on 21st May at Liverpool College, the UK F&T Apprenticeship Provider Meeting.
There was a chance to discuss training issues on young students, particularly those studying technological subjects and pattern skills.
There was general acknowledgement that there is a problem in skills and the process of learning uptake, which affects industry performance.
Anastasia Vouyouka presented the Telestia interactive pattern Making methodology ,in relation to the Apparel Product Development QCF Diploma, and Wendy Coley from Fashion Enter announced the coming seminar for 'Train the Trainer' that they are running in September with Telestia.

The Telestia educational content uses interactive multimedia, and a training simulation environment that has got many international awards,and has proven very effective in encouraging results.
Training results seen from the side of students and tutors:
Testimonials:
'This system enables students to draft blocks for any figure shape accurately and simply and then modifying the block to represent their own designs. I have been passionate about teaching students how to use this unique SITAM AB system for more than 11 years at Elisabeth Murdoch College.'
Felicity Symons
VET Certificate II in Applied Fashion Design & Technology Teacher
Elisabeth Murdoch College
'After many moons of searching for a pattern system that can be used properly and efficiently I found Telestia. I found that drafting a flat pattern with the old method and lots of calculations and so on a bit of a large task (specially with my kids that grow way too fast) It almost did not seem worth it.I find working with the patterns and playing with the lines and trying to visualize the the end result and the processes of making it one of the most satisfying activities I have ever come across. :)
'Adri Van der Zei, Australia The more I thought it was impossible to do the cutting and drawing, the more it got interesting and the more I came up with different ideas to design. It is amazing the way you can become a designer or tailor through online learning.
Tina Wande (Germany)

The State Scholarships Foundation for the European initiative for Lifelong Learning awards an honorary distinction to Sitam-AB/Telestia
in recognition for its contribution in the development of training systems for Vocational Education and training.

Telestia has been voted in the Cool Zone of the Miami Spesa Exhibition
as the 1st Cool Staff of hot technologies transforming the industry.

Telestia has been voted as one of five good practice projects
on eLearning in Europe, by the Leonardo da Vinci office.

The online pattern making and fashion design courses offered are of the highest quality, endorsing the most modern, sophisticated and easy to use tools, so that you can have the best results in your learning experience.

eTelestia was selected amongst over 100 nominated companies to receive the European Seal of Excellence in Multimedia, 2005 (link). 41 companies from 13 countries received the Seal but only a selected few received the highest distinction, the Platinum Seal. The eTelestia team is proud to be one of those distinguished companies.

Liana Vouyouka at CEBIT receiving the seal of excellence from Philippe Wacker, of European Multimedia Accelerator.

The eTelestia fashion and clothing courses are rich in graphic content, animation and video and highly interactive. The eTelestia course content and structure has been awarded the EUROPRIX 2002 Quality Seal.

The award of the Quality Seal shows that the Telestia-AB courses have been evaluated and judged to have met or exceeded the high standards of technological excellence required by the Europrix jury in the following categories: 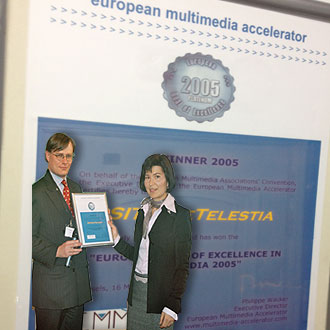